Why is Corrosion such an issue for the Air Conditioning Industry? 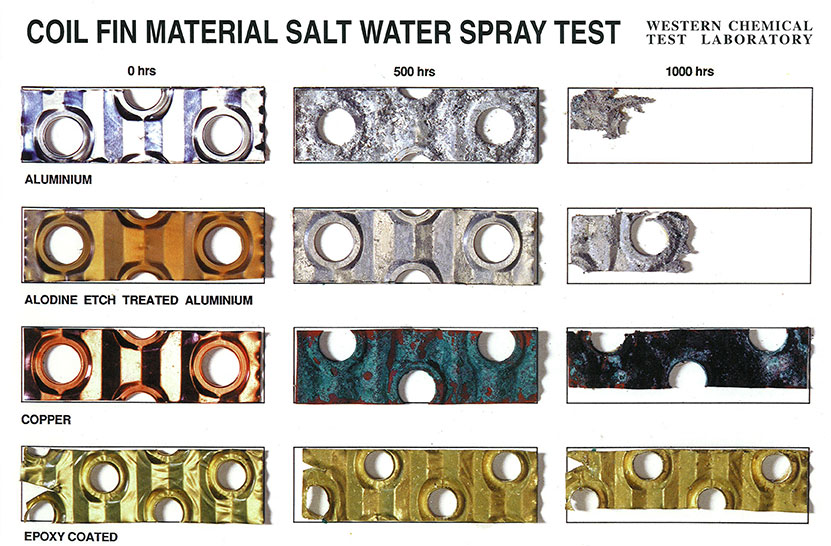 The real cost of this corrosion is in your energy costs.

Damaged or corroded fins can lead to premature failure of other components within the system. Damaged fins on a coil can impose extra static pressure on fan motors and blades leading to overheating and or eventual failure. Corrosion can lead to less heat transfer taking place, an elevated suction and condensing temperature, leading to compressor overheating and eventual failure.

A damaged or corroded condenser coil will lead to an eventual costly component failure, but it is the cost along the way that is the real “hidden” cost. This can be as much as a 30% increase in running amps, 35% increase in power consumed and as much as 25-30% loss in cooling and or heating ability.

Heat exchanger fin corrosion might look like minor damage to the naked eye and is often disregarded with a “She’ll be right for another few years”. Yes, it probably will last a few more years but what is the real cost in increased electricity bills?

Recently Temperzone’s Brisbane office witnessed at 45 kW machine with a damaged condenser coil. (Note the damage to the fins was probably caused by vandalism not corrosion but it illustrates the importance of condenser coil fins to efficiency.) The effect of the damaged coil was the difference of 53% in compressor COP! The COP of the new compressor was 4.2 COP (W/W) and with the damaged coil was only 2.0 COP (W/W). This means the running cost of the unit was more than double what it should have been. It is perfectly reasonable to expect efficiency losses of this magnitude from severe corrosion.

We need to know how to identify corrosion, how to protect against and how to treat it when it occurs. You need to understand what corrosion is and how will affect the life span of the air conditioning system. Today, we need to look at corrosion not just from a construction degradation point of view, but even more importantly, how will it affect the efficiency and power consumption.

Corrosion is the gradual destruction of materials (usually metals) by chemical reaction with their environment.

In the most common use of the word, this means the oxidation of metals in the presence of moisture, oxygen and some sort of corrosive agent like salt. Rusting, the formation of iron oxides, is probably the best known example of corrosion. Corrosion can also occur in materials other than metals, such as ceramics or polymers, although in this context, the term “degradation” is more commonly used. Corrosion reduces the useful properties of materials and structures including strength, appearance, permeability to liquids and gases, and importantly for air conditioning, their ability to transfer heat.

Many structural alloys corrode merely from exposure to moisture in the air. The process can be strongly affected by exposure to corrosive agents like salt, which accelerate the process. Corrosion can be concentrated locally to form a pit or crack, or it can extend across a wide area more or less uniformly corroding the surface. Corrosion occurs on all exposed surfaces. As a result a wide range of processes are used reduce the impact of water, oxygen and corrosive agents. These include; use of corrosion resistant materials, application of treatments which reduce the corrosion activity of the surface like passivation, chromate conversion and coatings like epoxy resin.

When we talk about air conditioning system corrosion we immediately think of coil corrosion and the most talked about type of coil is Galvanic Corrosion.

Galvanic corrosion occurs when two different metals have physical or electrical contact with each other and are immersed in a common electrolyte. This combination of metals and electrolyte is called a Galvanic cell and the two metals are called a Galvanic Couple. In a galvanic couple, the more active metal (the anode) corrodes at an accelerated rate and the less reactive (more noble) metal (the cathode) corrodes at a retarded rate.

Warning – A little bit of science and history content:
A little over two hundred years ago two Italian scientists disagreed over an experiment involving dead frogs legs. Luigi Galvani thought the reason the dead frogs legs moved when he connected them with various wires was due to “animal electricity”. Alessandro Volta decided this was nonsense and set about to disprove the theory of animal electricity. In the process of disproving Galvani, Volta invented the first battery and developed the basis for modern electro chemistry. Volta was a very clever fellow and his discoveries form the basis for all modern batteries, the electro plating processes and our understanding of certain types of corrosion. Of course the unit of electrical potential “the Volt” is named after him.

Despite the fact that Galvani defended “animal electricity” until his death, a number of electrochemical and industrial processes bear his name. So the Galvanic Cell, Galvanic Series, Galvanic Couple and Galvanizing are all named after a man who got it horribly wrong.
So what did Volta discover that is important in our understanding of corrosion?

So in a typical air conditioning coil, the aluminium fin is the anode and the copper tube is the cathode. So if a Galvanic Cell forms at the fin collar, where the aluminium and copper are in direct contact and water and an electrolyte like salt is present, the aluminium will be eaten away and the copper will be protected. It is worth noting that many substances other than salt will form an electrolyte and cause accelerated corrosion. Household bleaches, aerosol sprays, high humidity, and other prevalent factors found in every home can damage an indoor residential unit coil. An abundance of fertilizers, industrial plant processes, pollution, or acid rain can corrode outdoor condensing coils.

The following are sources of coil corrosion that could be overlooked:

There are a number of ways you can inhibit the galvanic corrosion of an air conditioning coil at the “fin collar”.

Use aluminium alloys that resist corrosion. Essentially the best material for heat transfer coils is soft temper material that is very pure. A range of materials like marine grade aluminium, copper or stainless steel either cannot be easily manufactured or are prohibitively expensive or both. Impurities such as silicon, nickel, iron and copper may reduce the corrosion resistance. Temperzone specifies and uses aluminium series 1100 for natural fin coils which has a 99% purity.

The quality of the fabrication process of the coil will affect the corrosion resistance. A coil which undergoes excessive stress to produce the fin shape may result in cracking at the collars and will corrode more due to stress induced corrosion. In addition, cracked collars allow a perfect site for corrosion to form.

One of the theories of coil construction is that to construct a well made coil, the collars should be tight on the copper tubes and tightly packed. This essentially forms a barrier to moisture and as such no galvanic cell can form, as no electrolyte can get between the copper and the aluminium.

Temperzone uses epoxy coating on all condenser coil fins. We believe that this is the most successful method of corrosion treatment for coil fins. See the image above.

There are many potential causes of coil leaks in indoor coils, ranging from manufacturing or process-related defects to copper corrosion.

Additionally, there are several different corrosion mechanisms that can affect copper tubing. The following discussion focuses on pitting corrosion failures of indoor coils.

The two main forms of pitting corrosion found in indoor coils are:

General pitting corrosion: caused by aggressive attack on the copper tube by airborne chemicals particularly chlorides. General pitting is visible to the eye and may ultimately lead to total refrigerant loss.

Formicary corrosion: (sometimes called ants nest corrosion), on the other hand, appears as multiple tiny pinhole leaks at the surface of the copper tube that are not visible to the human eye. Upon microscopic examination, the formicary corrosion pits show networks of interconnecting tunnels through the copper wall, hence the association with ants’ nests. The agents of attack involved in this corrosion mechanism are organic acids like acetic acid found in vinegar.

Case Corrosion: Corrosion of the outdoor unit case is very common and can ultimately lead to total failure of the unit. Make sure the case is made from materials that are appropriate to the onsite conditions. Temperzone’s standard case is manufactured from galvanised sheet steel which is then powder coated. We also offer Made to Order cases from a range of materials up to 316 stainless steel.

The most important things to remember about corrosion are: